Actually realising that I don’t really have to create something like a logo, though it may be something I can do for the sake of doing it… Box art is the main thing that I hadn’t considered until this point. Creating multiple different versions of the box art, with the idea of having the box be a simple square shape for the sake of convenience.

The designs I have done are both digital and or have been done within my notebook (Notebook 5), some works being the same but some new ones. Current count of ideas stands at six but unless I am completely happy with one main design then I would consider completing another set of ideas. 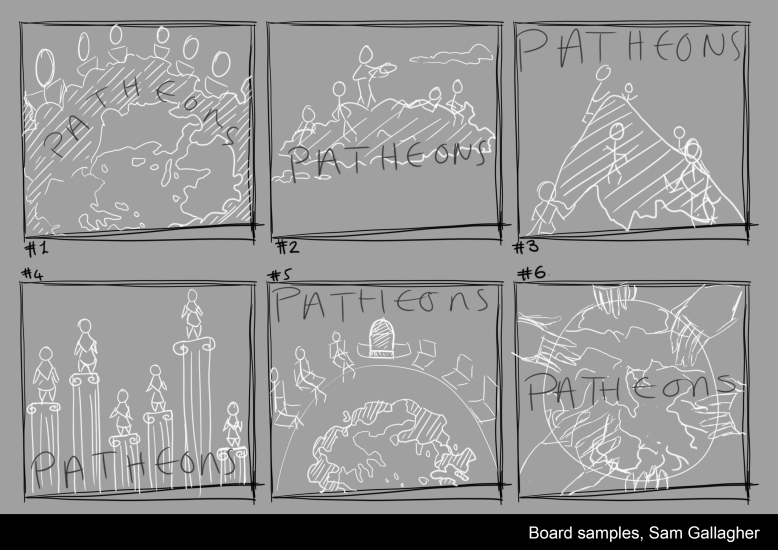 Using the following settings and colours:

Notes from these following images:

The concept is that of the  6 playable God’s looking down upon the empire of Greece, clouds being the framing and dividing line work between land and the upper lands. The land area on the lower section is that just of an overview, the same as what it would be like on the physical playable board. Text is currently seen as curved in centre placement, but would be willing to look into putting it slightly smaller and in either dead centre or slightly off centred.

All of the playable God’s lazing around on top of a cloud island. The title of the game just shy of being completely in centre of the cloud, so hanging off partly, capping and being the main drawing in that would compliment the softness from the imagery.

*Considering showing a possible optional appearance of personalities with the visual posture of each of the Gods on the board. Example: Hera and Zeus holding onto each other or Demeter lounging around playing with a flower in her hand.

The 6 playable God’s climbing to the top of Mount Olympus, in a race idea that the one that is coming at top would rule. Possible alteration would be that the one nearest the top may of slipped to indicate a passive way to never really think you have the game in the bag. Title of the game across the top where there is no image in contact with it.

Using the idea of pillars and statues – as well as the concept of how you would see the muses in the Disney variation of Hercules – the God’s that are playable would be on a pillar each designed in a traditional manner. The title placement, though it being across the bottom, depending on how tall the design for the pillars are done, top placement is an option.

*For the pillars, I think having their symbol on it to ensure that plays can understand their tokens as a hint think. A design idea that may not be noticed but one that if noticed would hopefully make someone laugh at the realisation that it was in front of them the whole time. Or using colours connecting to that of what is used to represent each God/Goddesses colour with playable pieces.

Thinking from the movie Percy Jackson: The Lightning Theif, there is a scene where all are present within a grand hall sitting down and the main chair being front and centre. I was trying to think about having the other main Olympians sitting around, as if they are awaiting for their ruler to take main seat. Centre visuals for the idea connected again to another movie scene, a scene from the film Clash of The Titans, how they had the world visually bellow them, as if they were looking down. The title being across the top.

This one had originally had the idea of having it be the shield that Medusa’s head would be upon but it made sense to change it to the actual Greek empire overview on a circle. The hands are that from the playable characters, but are meant to represent the actual players grabbing at the area of control. The title completely centre, cutting through the visuals to try and make a top/bottom appeal.

Having grabbed some other students to have a discussion as to which ones that would work, the final verdict comes forward as #1, #4, #6. The one that was undecided was #2, and the ones that had been rejected were #5 and #3.

The overall discussion was short, to the point but I think we all agreed on the images in the end having actually speaking out the opinions and reasoning for the choices.

#3 was scrapped for the fact it, though looked like a race, didn’t give off the feeling of being something all powerful like how Gods and Goddesses should come across.

#5 was removed because it made it too houses of parliament, rather than a pillar of power stand point.

#2 is in reserve because as it stands the idea of it visually works, just it would seem a bit too bland for the complete box art for the game as it currently stands. Maybe for some over all visual arts, or even using it as a framing art piece on the rules pamphlet.

The other remaining 3 had been kept for their own giving reasons, each showing a different viewpoint but each showing what I would want to get across emotionally/mentally.

Roughly putting it together, the following colours used:

Scrapping the ideas and actually going to the ones that I have most interest in and that kept drawing not only my own eyes but that of the younger audience, the outcomes are becoming that of these following images:

I am still concerned with the full body design so there is a chance that I may consider using the head busts that I had designed for the information cards of the playable characters.